My hardened yet flexible husband; the conductivity of the seduction 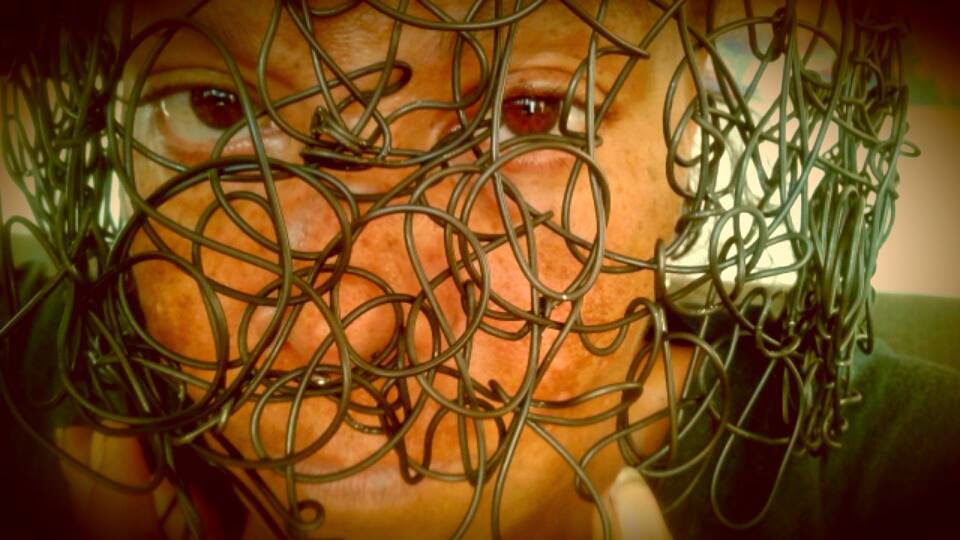 Physical Properties. Metals differ so widely in hardness, ductility (the potentiality of being drawn into wire), malleability, tensile strength, density, and melting point that a definite line of distinction between them and the nonmetals cannot be drawn. The hardest elemental metal is chromium; the softest, cesium. 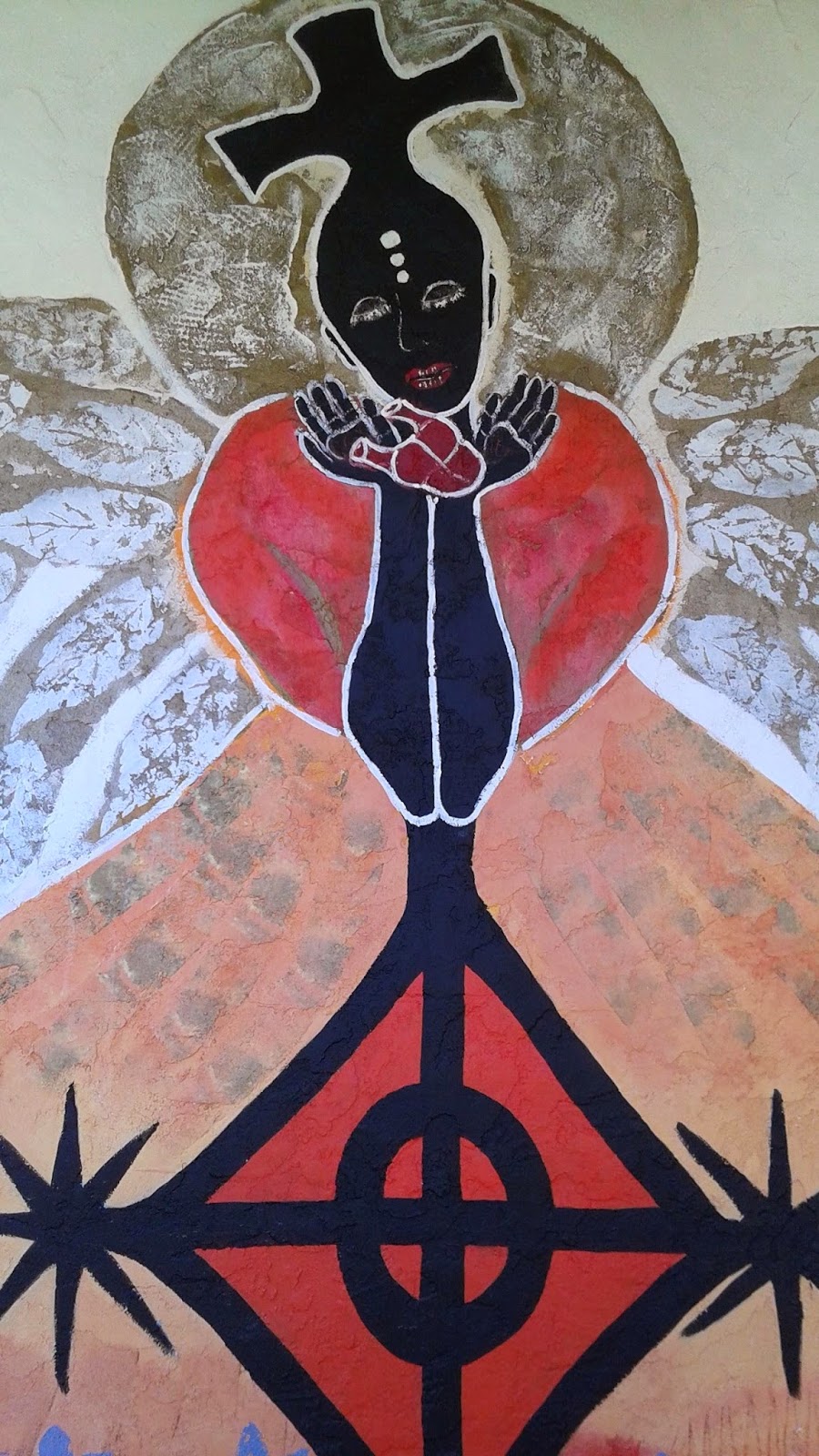 In her Petro nation aspect as Erzulie Dantor she is often depicted as a black woman, holding a child protectively in her arms. She is a particularly fierce protector of women and children. She is often identified with lesbian women.

A common syncretic depiction of Erzulie Dantor is St. Jeanne D'Arc, who is displayed carrying or supporting a sword. Another is as the Black Madonna of Częstochowa, as she is represented as being dark-skinned. Her colours are red, gold and navy blue. Her symbols are a pierced heart and knives or swords. Her favourite sacrifices include black pigs, griot (seasoned fried pork), and rum.

The scars on her cheek are said to be the result of a fight between her and Erzulie Freda over possession of Ti Jean Petro, as the two are fierce rivals. The cuts shown on her face in the syncretic reproductions are matches to the surface damage on the Black Madonna's face in the original icon.


The interesting part of that story in relation to me is that Erzuli is an element of Oya, another representation of a strong woman who loves hard and is not afraid to destroy that that does not work congruently with the flow of the universe. Oya was married to Oggun, representing metal, law and order, forest and seclusion.
I have always avoided Oggun types mainly because they are not seductive or interested in the romance and play that it takes to keep the attention of an Erzuli type. Lately I have found more and more attraction for this character in myself and so i decided to embrace the seclusion and the intensity of solitude and discipline so i added a (large) element of metal into my current project. I am spending hours and days and weeks twisting metal that will be worn as a costume in a performance piece.
The longer it takes, the closer Oggun gets to me and i can feel the artistic abandonment taking over. A complete submission to his energy. I am being pulled and twisted from my core. Any rigid nonflexible part of being will not survive this journey. I will be more adaptable and spiritually bound to the conductivity of my "husband", Metal Oggun. 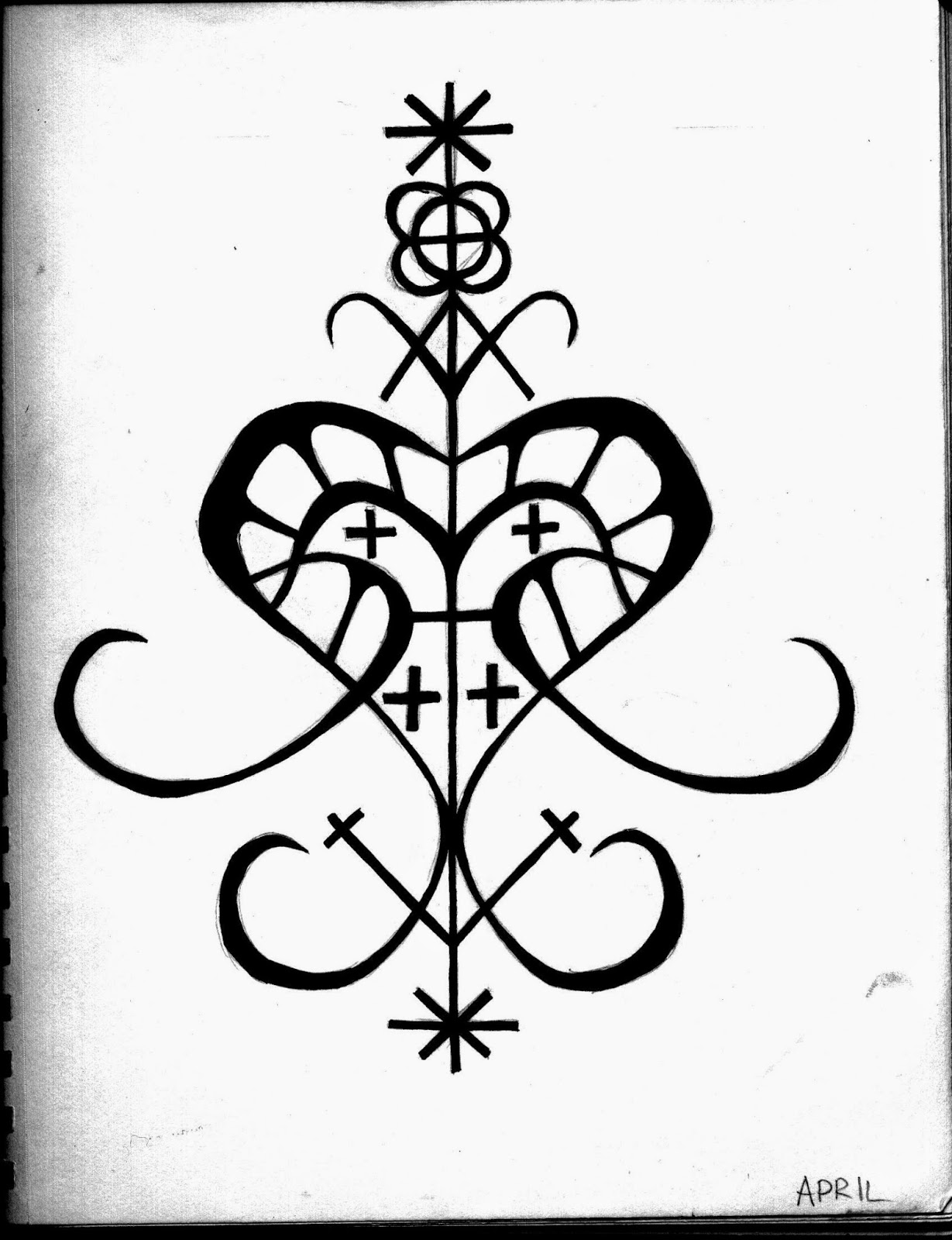 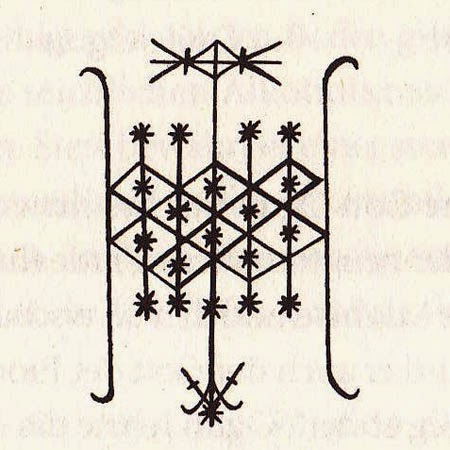 Posted by Ayanna Bassiouni at 3:54 PM No comments: 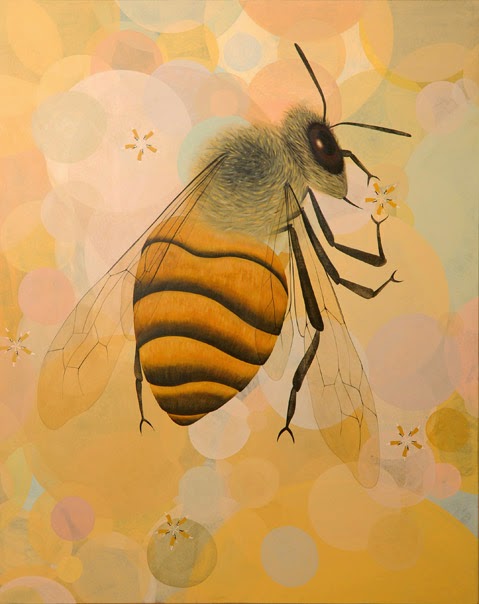 I have only been stung by a bee 2 times in my life. I am always just living congruently with them, very rarely do we threaten each other. I have been working obsessively for my next show, 'Emancipating Boundaries', it is now the 11th hour and time has to be slowed down in order to complete the amount of work i have to do in 13 days. Interesting relations with honey bee's in the last 24hours. I lay on top of one in my living-room and it stung me reluctantly, because i was there for a second before i felt the stinger. I realized it was a bee and pulled the entire bee out of my arm hoping that it would not die if i kept the stinger in tact. I put it outside on a flower but when i checked the next morning it had died. I took this opportunity to do research of the significance of a honey bee in my life right now. The findings are interesting: 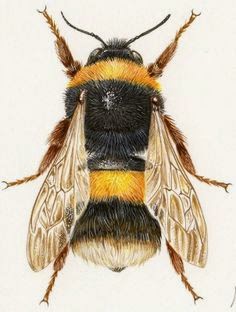 When Bee comes buzzing into your life:

If the Bee has shown up in your life, examine your own Productivity. Are you doing all you can to make your life more fertile? Are you busy enough? Are you making time to savor the honey of life and not becoming a workaholic?
The Bee reminds us to make our lives productive while the sun shines and to enjoy the nectar of efforts. No matter how great the dream is, there is the promise of fulfillment if we pursue our Dreams.


If the Bee is your Animal Totem;

You have the ability to accomplish the impossible over and over again. You know how to enjoy the sweetness that life brings you and you understand the proper use of your own Energy. Your intentions are always focused on a clear path and goal in Life. You are also self-sufficient, very focused, a very hard worker, and you work best when they are working with others.


If the Bee has come to you in your dreams:

To see Bees in your dream symbolizes wealth, good luck, harmony, creativity and bliss. Bees are also symbolic of hard work and industry as represented by the common phrase “busy as a Bee.” Your hard work will pay off in the end with sweet results. Alternatively, the dream represents the things that are happening in your life or something that is buzzing with Activity. Is there a lot going on in your life?
In particular, to see the queen Bee in your dream refers to a dominant female in your Life.
To dream that you are stung by a Bee, indicates that you have been wronged. Maybe you have been hurt by some stinging remark.

Organization of the colony. There are four species of Apis, the honey-bee, one of which is Apis mellifera, the Western honey-bee, which is the commonest hive-bee in this country. There are three kinds of bee in a colony: in the summer, a few hundred drones or males, one egg-laying female, or queen, and from 20 to 80 thousand sterile females or workers. The mature queen is usually easily recognized by her large abdomen.
The Queen. A queen bee may live from two to five years and, except for a short period at the end of her life when one of her daughters takes over the colony, she is the only egg-laying female. All the members of the colony, whether drones or workers, are her offspring. She spends all her time laying eggs, perhaps up to 1500 a day, each one being placed in a wax cell made by the workers. The queen can feed herself but in the hive the nearest workers turn towards her, lick her body and feed her by regurgitating a special secretion of their salivary glands, called "royal jelly", on to their probosces from which the queen can absorb it.
The queen usually mates only once in her life (though second and third matings are known to happen) and stores the sperms received from the drone in a sperm sac in her abdomen. This store of sperms lasts her for the two or more years of egg-laying, a small quantity being released with each fertilized egg laid.
When the store of sperms is used up she may continue to lay eggs but they are all unfertilized and will become drones. By this time one of her daughters has been reared as a queen and is ready to take over the egg-laying. 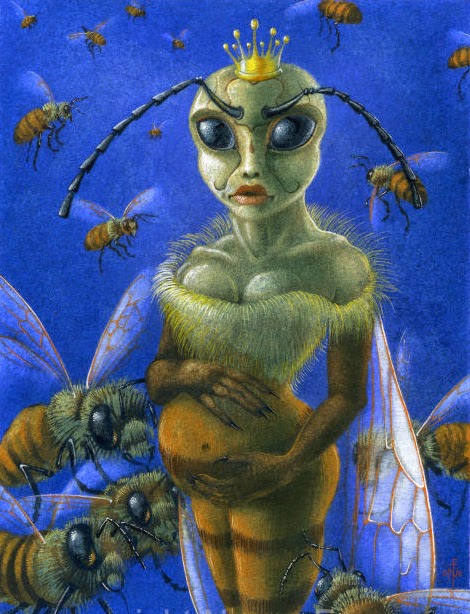 Posted by Ayanna Bassiouni at 4:01 PM No comments: 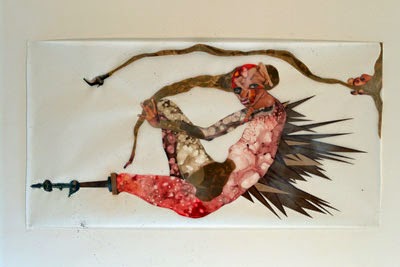 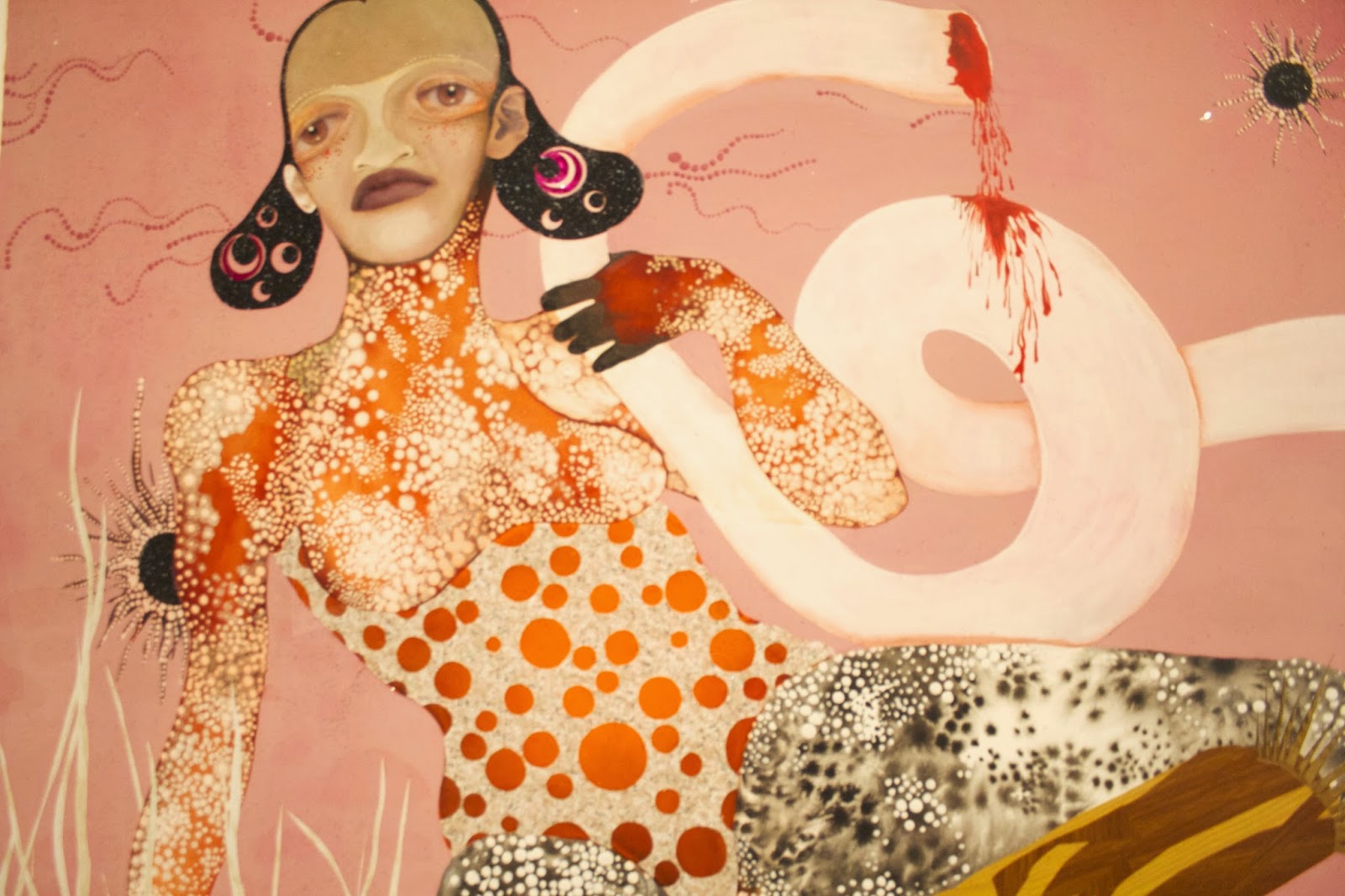 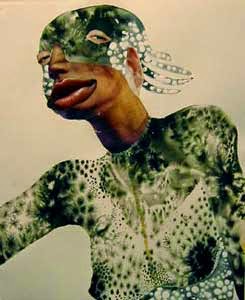 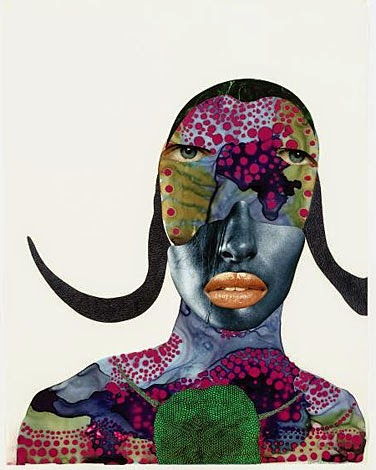 "Females carry the marks, language and nuances of their culture more than the male. Anything that is desired or despised is always placed on the female body.”
Wangechi Mutu
Posted by Ayanna Bassiouni at 1:32 PM No comments:

Beware the gravitational pull of mediocrity


In the early years of the last century, Spanish philosopher José Ortega y Gasset proposed a solution to society’s ills that still strikes me as ingenious, in a deranged way. He argued that all public sector workers from the top down (though, come to think of it, why not everyone else, too?) should be demoted to the level beneath their current job. His reasoning foreshadowed the Peter Principle: in hierarchies, people “rise to their level of incompetence”. Do your job well, and you’re rewarded with promotion, until you reach a job you’re less good at, where you remain.
In a recent book, The Hard Thing About Hard Things, the tech investor Ben Horowitz adds a twist: “The Law of Crappy People”. As soon as someone on a given rung at a company gets as good as the worst person the next rung up, he or she may expect a promotion. Yet, if it’s granted, the firm’s talent levels will gradually slide downhill. No one person need be peculiarly crappy for this to occur; bureaucracies just tend to be crappier than the sum of their parts.
Yet it’s wrong to think of these pitfalls as restricted to organisations. There’s a case to be made that the gravitational pull of the mediocre affects all life – as John Stuart Mill put it, that “the general tendency of things throughout the world is to render mediocrity the ascendant power among mankind”. True, it’s most obvious in the workplace (hence the observation that “a meeting moves at the pace of the slowest mind in the room”), but the broader point is that in any domain – work, love, friendship, health – crappy solutions crowd out good ones time after time, so long as they’re not so bad as to destroy the system. People and organisations hit plateaux not because they couldn’t do better, but because a plateau is a tolerable, even comfortable place. Even evolution – life itself! – is all about mediocrity. “Survival of the fittest” isn’t a progression towards greatness; it just means the survival of the sufficiently non-terrible.
And mediocrity is cunning: it can disguise itself as achievement. The cliche of a “mediocre” worker is a Dilbert-esque manager with little to do. But as Greg McKeown notes, in his book Essentialism: The Disciplined Pursuit Of Less, the busyness of the go-getter can lead to mediocrity, too. Throw yourself at every opportunity and you’ll end up doing unimportant stuff – and badly. You can’t fight this with motivational tricks or cheesy mission statements: you need a discipline, a rule you apply daily, to counter the pull of the sub-par. For a company, that might mean stricter, more objective promotion policies. For the over-busy person, there’s McKeown’s “90% Rule” – when considering an option, ask: does it score at least 9/10 on some relevant criterion? If not, say no. (Ideally, that criterion is: “Is this fulfilling?”, but the rule still works if it’s “Does this pay the bills?”)
Mediocrity is no mere character flaw, but a deep tendency of the universe, to be ceaselessly fought, with no hope of final victory. Sorry, I don’t make the rules.
Posted by Ayanna Bassiouni at 10:35 AM No comments: